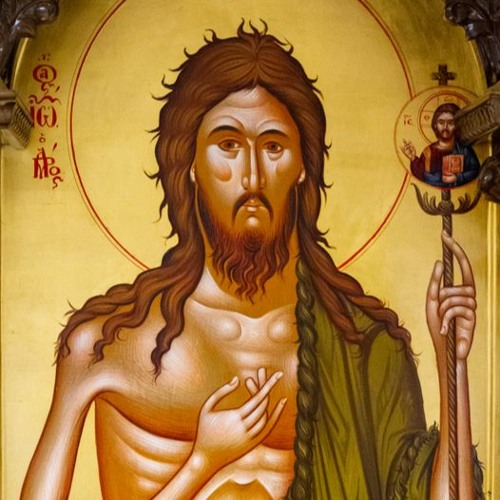 Gospel Acclamation. cf Luke 1:76. Alleluia, alleluia! You, child, will be called the prophet of the Most High; you will go before the Lord to prepare his ways. Alleluia!

To listen to the audio recording of the readings, prayers and reflections for this weekday feast of the Birth of John the Baptist 24th June 2020, please click this link here: https://soundcloud.com/user-633212303/weekday-feast-faith-hope-and-love-nativity-of-john-the-baptist-episode-236/s-9utQbCtrsgZ  (episode: 236)

The grace of our Lord Jesus Christ, and the love of God, and the communion of the Holy Spirit be with you all.

On this special (feast of) Nativity Of John Baptist

Brothers and sisters, as we prepare ourselves to celebrate the Lord,s supper, let us recall our sins and acknowledge them in silence.

The solemnity of the birth of John the Baptist was observed on this date in the fourth century. It celebrates the holy birth of "the greatest of all the prophets," the one who leapt for joy in his mother's womb, who prepared the way for Christ, announced his presence, and baptised him in the Jordan River.

Thanks be to God for wonderful, faithful and obedient servants such as John the Baptist and his parents...

Elizabeth and Zechariah were faithful..  they obeyed God, they hoped and trusted in the promises God has long ago made to his people.. and they obeyed God in cooperating in bringing God's will to fulfilment in their lives...

From his own lips...  John's words, recorded for the inspiration of countless generations include these:

Behold the Lamb of God who takes away the sin of the world!

Anyone with two tunics should share with him who has none.

(In the anticipation of the wonderful and consistent values of the Kingdom from the beginning and revealed fully in Christ, he taught the ethics of concern and charity and justice to all our brothers and sisters in need).

Repent, for the Kingdom of Heaven is near.

(He taught and practiced the change of heart and mind, the turning back to God and the rightness of trusting in God's mercy).

He must increase, but I must decrease.

(such an abiding example of humility... for all us disciples.. this is about Christ.. this not about us....   Christ must increase, we must step back and be servants of Christ's mission...  we are her to usher in the Kingdom of God, not the kingdom of ME!)

The father's of the early church spoke rightly and highly of Saint John the Baptist.....

The Great speaker, John Chrysostom said this of John the Baptist:

"Such a one was John, who regarded not the crowds, nor opinion, nor anything else belonging to people, but trod all this beneath his feet, and proclaimed to all with becoming freedom the things respecting Christ. And therefore the Evangelist marks the very place, to show the boldness of the loud-voiced herald. For it was not in a house, not in a corner, not in the wilderness, but in the midst of the multitude, after that he had occupied Jordan, when all that were baptized by him were present, (for the Jewish people came upon him as he was baptizing,) there it was that he proclaimed aloud that wonderful confession concerning Christ, full of those sublime and great and mysterious doctrines, and that he was not worthy to unloose the strap of His shoe. Wherefore he says, These things were done in Bethany, or, as all the more correct copies have it, in Bethabara. For Bethany was not beyond Jordan, nor bordering on the wilderness, but somewhere near to Jerusalem."

The best quote is reserved of course to Our Lord himself who summed up Saint John so extraordinarily:

"Truly I tell you, among those born of women there has not risen anyone greater than John the Baptist; yet whoever is least in the kingdom of heaven is greater than he. (Matt 11:11)

William Barlcay explains this great compliment by Christ and also the meaning of this mysterious line at the end....

"Such was the tremendous tribute of Jesus to John, spoken with the accent of admiration. There had never been a greater figure in all history; and then comes the startling sentence: "But he who is least in the Kingdom of Heaven is greater than he."

Here there is one quite general truth. With Jesus there came into the world something absolutely new. The prophets were great; their message was precious; but with Jesus there emerged something still greater, and a message still more wonderful. C. G. Montefiore, himself a Jew and not a Christian, writes: "Christianity does mark a new era in religious history and in human civilization. What the world owes to Jesus and to Paul is immense; things can never be, and men can never think, the same as things were, and as men thought, before these two great men lived." Even a non-Christian freely admits that things could never be the same now that Jesus had come.

But what was it that John lacked? What is it that the Christian has that John could never have? The answer is simple and fundamental. John had never seen the Cross. Therefore one thing John could never know--the full revelation of the love of God. The holiness of God he might know; the justice of God he might declare; but the love of God in all its fulness he could never know. We have only to listen to the message of John and the message of Jesus. No one could call John's message a gospel, good news; it was basically a threat of destruction. It took Jesus and his Cross to show to men the length, breadth, depth and height of the love of God. It is a most amazing thing that it is possible for the humblest Christian to know more about God than the greatest of the Old Testament prophets. The man who has seen the Cross has seen the heart of God in a way that no man who lived before the Cross could ever see it. Indeed the least in the Kingdom of Heaven is greater than any man who went before.

So John had the destiny which sometimes falls to people; he had the task of pointing all the world to a greatness into which he himself did not enter. It is given to some people in History, to be the signposts of God. They point to a new ideal and a new greatness which others will enter into, but into which they will not come. It is very seldom that any great person of moment in history is the first one to toil for the reform with which their name is connected. Many who went before them glimpsed the glory, often laboured for it, and sometimes died for it, yet did not live to see it fulfilled in completeness.

There is a legend told of person who, from the windows of his house every evening, used to watch the lamp-lighter go along the streets lighting the lamps--and the lamp-lighter was himself a blind man. He was bringing to others the light which he himself would never see. Let a person never be discouraged in the Church or in any other walk of life, if the dream they have dreamed and for which they have toiled is never worked out before the end of their days. God needed John; God needs his signposts who can point people on the way, although they themselves decreased before that goal is achieved."   Great is the reward they laboured for in God's vineyard…..

Saint John the Baptist,,,    and Saints Elizabeth and Zechariah…  pray for us…

To listen to my weekly homily audio podcast, please click this link here.
NB - It is often a week or so Ahead: https://soundcloud.com/user-633212303/tracks

You are welcome to subscribe to Fr Paul's homily mail-out by sending an email to this address: paulkellyreflections+subscribe@googlegroups.com

Prayers and chants — Roman Missal, 3rd edition, © 2010, The International Commission on English in the liturgy. (ICEL)