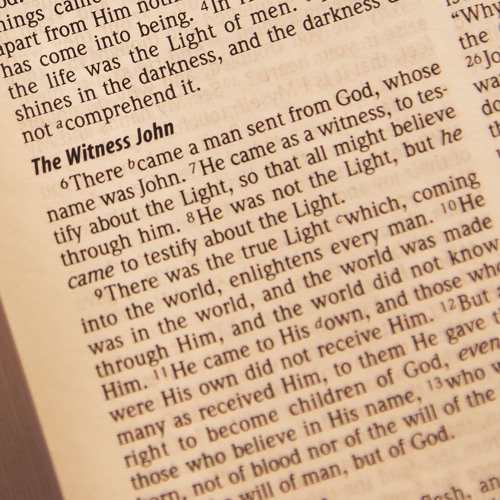 On this Feast day of the Birth of John the Baptist... We also know what this means……. "it is only six months until Christmas!"

This year is speeding along, but this feast of the Birth of John the Baptist reminds us to stop and reflect upon the hidden graces that God is preparing for us. John was born six months before Our Lord, and so the feast of John’s Birth is placed exactly six months prior to Christmas and the Feast of the Annunciation is placed exactly three months prior to that, so as to align with the Gospel account from Luke.

John is one of those significant figures in the Gospel, and he is one of the select few who has more than one feast day in the church year. He has a feast (and a vigil, no less!) for his Birth, // And, he has a feast day for his martyrdom, - which also has a vigil mass!!). He is important because of his role in preparing for the coming of the Messiah and his call to repentance (turning back to God and making a profound change of heart towards God and God’s values – turning away from selfishness).

John also is an inspiring example of a prophet who refused to water down his message for the sake of popularity// and unswervingly proclaimed the challenging message of God,// often in the face of stubborn resistance.

John the Baptist is an ongoing sign of the ageless consistency of God’s word. //God’s law and God’s values do not bend to the trends and fads of the times.

Our Lord himself said of John the Baptist: “what did you go out to see in the wilderness? A Reed bending in the wind?? No.”

John was not a pushover in the values and message of God. No “trendy sell-outs” or ‘watered-down messages here (with John)!!!

Today’s feast is primarily (as all feasts are) about God’s faithfulness and graciousness. The unfolding of God’s plans in and through the generous hopes and dreams of God’s faithful followers. Mary and Elizabeth, and eventually Zechariah, believed and trusted in what God was doing in their lives, and cooperated fully.

I like John the Baptist a lot! He is one of my co-patron saints, along with St Paul (of course) and John the “beloved disciple”. I like the fact that I was born on the eve of the Birth of John the Baptist. (On a personal note, It is nice to have his feast day coinciding on the weekend of my 50th birthday  - I give thanks to God for countless blessings received-).

Interestingly, if we look at the results of the five-yearly census, the 2016 Australian Census showed that 22% of the population identify as being Catholic...(down from 30% in 2011) and that the total percentage of people identifying as Christian (including Catholics) is 52% of the population of Australia. The percentage of people who identify as "no religion" is 30% (up from 22% in the 2011 census)// (although this statistic is not always clear – Does it mean that 30% of people do not believe in God or rather just don’t identify with a particular religious tradition/  It could also mean a significant number of people are embarrassed about admitting their belief and membership of the Christian faith, in a time and culture that can mock and belittle that faith).

Too often, we hear various commentators asking "why are governments listening to the Christian churches… Why are they exerting such an influence in politics in a secular nation…" but, as you can see.. with 52 % of the population identifying with the Christian religion… WHY NOT….. The Christian perspective is still significant…

However, in any case, this weekend's feast day is always helpful to remember the message of John the Baptist…

John the Baptist reminds us that it is not about numbers and majorities...... Even if a minority raises objections about something that is wrong and unjust... their voice is important... and even if a majority of people declare something to be so, it does not mean it is right or good.

The example of the Prophets from of old is that - All that matters is ONE voice.. // One true voice… //  Speaking God’s message. A lone voice, crying out in the wilderness ---- is a voice certainly worth listening to. He was willing to pay the ultimate price for standing up for those values.....

Even if the majority is off chasing fads… the voice in the wilderness,… a voice like John the Baptist.. still speaks the truth, without fear or favour. John prepared the way for the Lord. he also fearlessly spoke of the values of the Kingdom without compromise.

To listen to my weekly homily audio podcast, please click this link here.
NB - It is often a week or so Ahead:https://soundcloud.com/user-633212303/tracks

You are welcome to subscribe to Fr Paul’s homily mail-out by sending an email to this address:paulkellyreflections+subscribe@googlegroups.com

Further information relating to the audio productions linked to this Blog:
“Faith, Hope and Love, A time of Christian worship and reflection” - Led by Rev Paul W. Kelly
Texts used in this programme are for the purposes of worship and prayer for listeners wherever you are.
Prayers and chants are taken from the English Translation of the Roman Missal, edition three, © 2010, The International commission on English in the liturgy.
Scriptures are from the New Revised Standard Version: © 1989, by the national council of Churches of Christ, USA. , //adaptations to conform with Catholic liturgical norms, © 2009, by the same.

Prayers of the Faithful are adapted from Robert Borg’s 1993 book “ Together we pray”. Published in Sydney Australia By E.J. Dwyer. (Out of print).

May God bless and keep you.

When we eat this Bread and drink this Cup, we proclaim your Death, O Lord, until you come again.

Preface  - special for  feast day – “The mission of the precursor”

Communion side. pwk: RH
++++
Go and announce the Gospel of the Lord.


To unsubscribe click here.
--
You received this message because you are subscribed to the Google Groups "Catholic Reflections (Fr Paul Kelly archives)" group.
To unsubscribe from this group and stop receiving emails from it, send an email to paulkellyreflections+unsubscribe@googlegroups.com.
For more options, visit https://groups.google.com/d/optout.
Posted by PK at 9:20 am